APR
1
2016
We thought about some elaborate April Fool's joke we could pull today, but our age got the best of us. We decided it was too much effort. So today we will simply talk about the progress we have made on the campervan. Number 1 on Cynthia's list is the addition of struts on the upper cabinet doors. These struts hold the door up so you don't have to. We ordered the struts from eBay as they were 1/4 the price of buying them locally. Putting them on was fairly easy, the hard part making sure cabinet had the right location and bracing for them. There's a picture of that below for you.

We started on the storage drawers under Cynthia's bed. We've never made drawers before and to be honest, we are intimidated by it. The drawer size, the framing, it all has to be exact else the drawer won't slide in and out right. Drawer slides have zero tolerance for error so we will see how many times we have to adjust something to get it right. For now, we got the holes cut for the drawers. We also added access doors on each side. We did this so we don't have to lift the mattresses every time we want something from under there.

We look online for information on how to do most of the carpentry stuff and we are amazed at the skill people have. We see other people who have converted their van and it looks like a factory job with amazing fit and finish. Well, we aren't that good. So while our van won't have the finest craftsmanship on the inside, it will look decent and will certainly be functional. [85] 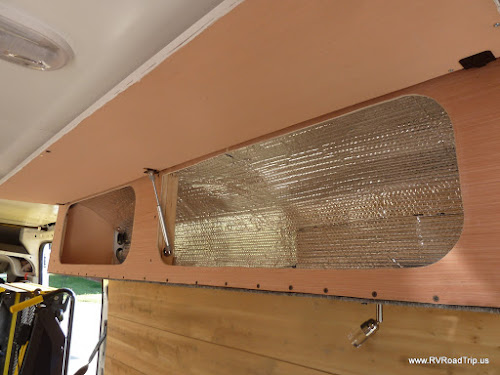 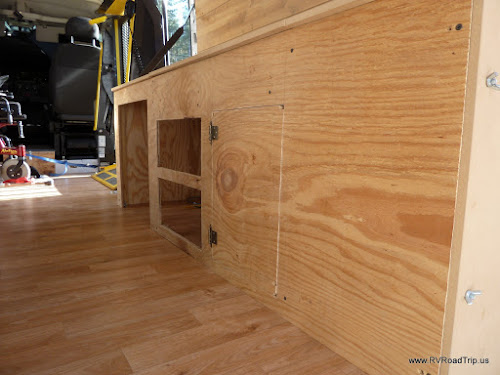 APR
9
2016
Aside from a near constant 25 MPH wind, this weekend has been gorgeous. Not a cloud in the sky... a great weekend to go camping! We had intended to go camping nearby this weekend, but Jerry was asked to preach the Sunday Morning Service at 1st Baptist in West Blocton, AL. It is always an honor to be asked to speak at a church (or for any other group) and we can go camping any old time. Priorities, ya know? [86]
APR
14
2016
Sunday Morning services went well as Jerry preached at 1st Baptist Church in West Blocton. The folks there were very friendly and many of them asked him to come speak again soon.

We still haven't gone camping yet. This crazy spring weather has it all bright and sunny during the week and rainy on the weekends. And this coming weekend, Cynthia will be at the annual yard sale they have at the Senior Center where she works. We've got our eye on the 10 day forecast for the following weekend, but James Spann says any forecast beyond 12 hours is a guess. We're ready to take some more pictures and videos to share online, but we need to go camping somewhere to be able to do that! [87]
APR
29
2016
Cynthia has been hankerin' to head to the beach ever since Winter set in. She finally put her foot down and said we were going this weekend, leaving on Wednesday April 27th. She put in for the time off at work and we set about packing up the van. She loaded her side with hair care products, makeup, and 7 variations of outfits that would be cute no matter how they were paired up. I packed up some shorts and t-shirts, underwear and basic toiletries and I was done! And I still had lots of room left in my cabinet. We loaded up the necessary groceries for a 3 to 4 day excursion, grabbed the dog and his stuff and we hit the road just after breakfast on the 27th.

We took the scenic route from Centreville down to Fort Pickens. No really, we took the SCENIC route even getting on a one lane road somewhere near Greenville. At that point we hopped on I-65 and headed South until the exit for Flomaton, which pointed us at Pensacola. We arrived about lunch time so we stopped at the Native Cafe for lunch. We each ordered a burger and fries ($9.50 per order). Even though it was expensive, it was quite delicious! The burger was big and we had lots of fries, so much so that we took our leftover fries out with us.

We then drove over to the Gulf Islands National Seashore and the gate to the Federally operated park. Instead of paying the required admission fee, I showed the gate guard my Federal Access Pass and he waved me on in. We stopped at the campground check-in station and my Federal Access Pass got me 50% off the regular camping rate. We paid for 2 nights at $13 per night (regular price is $26 per night). We drove over to our campsite and quickly set up camp.

Now it was partly cloudy at this point so everything was great. Cynthia walked to the beach (I cannot walk on sand) and scouted out spots to relax and read her book. Roosevelt (our dog) and I held down the camp... meaning I sat in a chair and took a nap. Evening came and the clouds rolled in which we expected as we had been checking the weather forecasts all week long. Cynthia cooked up some chicken strips and we cut them up and put them on a big ol' salad. Mmmm, good eats. As it was starting to get dark, the weather started changing. The winds picked up and the new weather forecast said it would rain all night and part of the next day. Rain at night is awesome, we get to sleep to the sound of rain hitting the van roof. Rain during the day is not so great.

We woke up the next day and it had not rained at all but it was very overcast. The weather radar showed a huge storm in the West barreling our direction right along the coastline. The winds whipped up to near 25 MPH and all the other campers pulled their awnings in. Cynthia said we better head out as this storm is supposed to last 2 days. So we packed up our stuff as the rain started to fall. Other camper scurried into the RVs and closed all the windows and doors. We drove out, dropped our trash into the dumpster and headed right into the storm along the Gulf Coast Highway. The winds rocked the van as we drove... had we been parked, people might have thought there was some action going on in the van. Anyway, we drove on to Mobile where we stopped to visit my son. We then headed towards home, arriving safe and sound on Thursday the 28th to a bright sunny day, far north of that dang storm. Even though it got cut really short, it was a fun trip. Below are a few pics of the trip, more are posted on the picture page. The last picture is our obligatory "view from the van" when we are camping. [88] 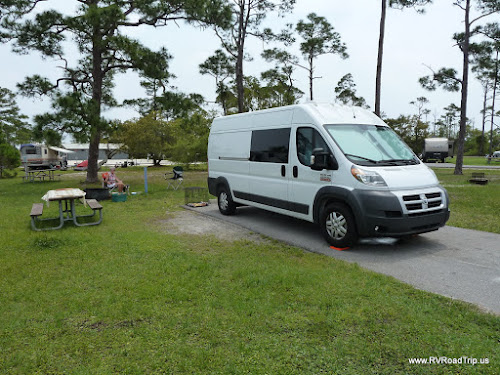 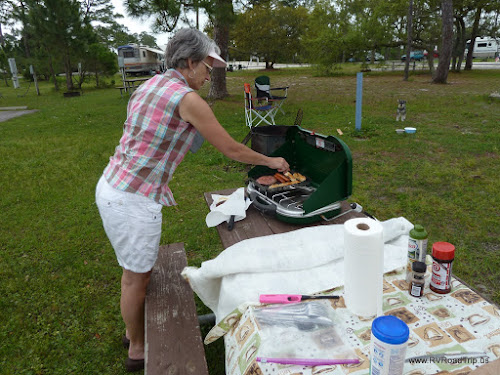 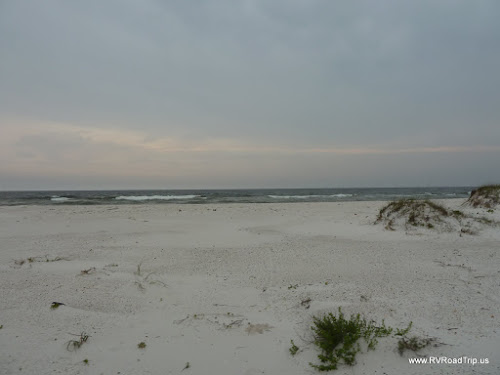 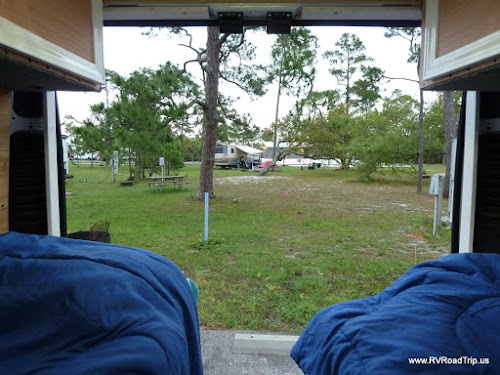