FEB
1
2016
Dang. In the first 5 weeks of 2016 Jerry has been to the doctor 5 times! If it ain't one thing it is another, but I guess that is all part of life, part of growing older. We're still quite blessed so no need to grumble about things you can't change.

The Birmingham VA built a new parking deck and it is nice. The lower floor has 25 foot ceiling and great for high top vans... except those idiots let cars park there! Cars fit on every floor, but vans only fit on the bottom floor, so why not restrict parking on that floor to high top vehicles only? Jerry has complained to the Birmingham VA 3 times so far to no avail. It is a pain when he gets to the hospital and cannot unload his wheelchair because every van size handicap spot has a car in it. He just sent a message to both Alabama senators about this. Maybe they can get something done. We shall see... [75]
FEB
6
2016
I've got news and bad news on the high top parking at the VA. First the good news... they have 3 spots marked as high tops only. The bad news, they are still letting cars park in them. I arrived for my appointment and had no place to park. Thankfully, someone was leaving and I was able to get their spot but that was pure luck with all the cars circling like buzzards for a 1st floor parking spot.

We're thinking about making a trip over to Bossier City, LA later this month or early next month. Jerry's daughter lives there along with her husband and our grandkids. A quick look at things to do in that area includes casinos and Hooters. Yeah, we'll pass on those places. Maybe the Boardwalk will be decent. In any case, we'll get to see the grand younguns.

We've made more progress on the van. The ceiling is in and both LED light fixtures are connected. The upper cabinets are built, we just need to finish the doors and hang them. The doors are made but need to be painted. We're excited to get that part done because from then on it should just be little things to do. Oh wait, we still have to build the kitchen drawers, hook up the water and plumbing and install the refrigerator. Ah well, we'll get it done all in good time. [76] 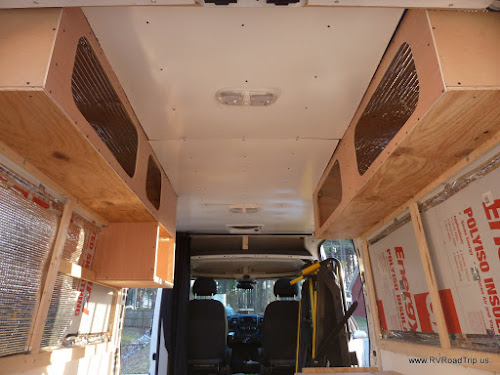 FEB
8
2016
We went ahead and hung the upper cabinet doors today. Now our clothes won't fall out when we're driving down the road. This will look a lot better once we get the ceiling trim pieces installed. These will cover the edges and the seams between the ceiling panels. And of course, the covering over the cabinets themselves. That will be better than looking at bare wood. Slowly but surely it is coming along. [77] 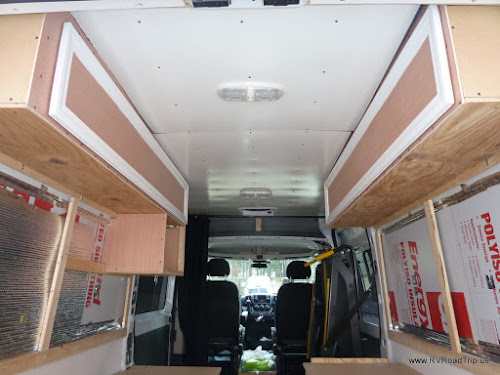 FEB
17
2016
Thanks to the cooperation of the weather, we made some more progress on the van. We got the wall coverings up, and the driver's side wall is hinged in the middle so we can store the window coverings inside the wall when they are not in use. We added 4 more inches of memory foam to the mattresses, so now we are at 10"! Woohoo, comfy. Still not as comfy as our bed in the house, but awesome for a campervan.

We also finished the upper cabinets and have the covering on them as well. We still need to add the door struts, the ones we ordered turned out to be too stiff. Lesson learned there. Anyway, here is a hot of the inside of the camper, ready for a road trip! [78] 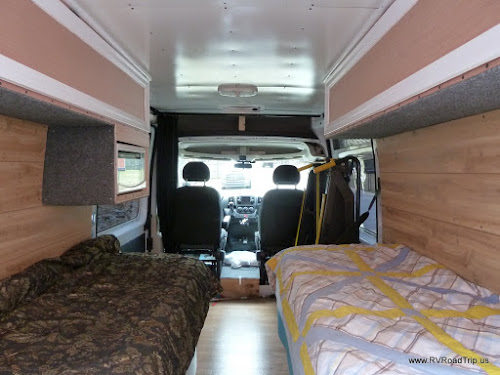 FEB
23
2016
Woohoo! Road Trip! We just got back from a nice little road trip over to Bossier City, Louisiana. Jerry's daughter and her family live there so we went to visit them. Jerry's son was there as well, so that was a bonus. Jerry and his son went to see the Deadpool movie while we were there. They hit up the matinee at the good ol' Tinseltown Theater and said they had a good time. His daughter had some sort of 12-24 hour super bug that makes you spew from both ends (sorry about that description) but she got over it in time to enjoy our visit on the last day. Her kids had it the week before. We saw on Facebook that Jerry's son had caught it the day after we left and Cynthia has it today! I hope Jerry doesn't get it!! Even with all that going on, it sure was nice to see her and her husband, the grand babies and his son.

The van did great on the trip, averaging about 17 MPG. It would have gotten about 20 MPG but the winds were so bad the whole way there and back. We slept in the van each night and it was comfortable now that we have 10 inches of memory foam! It is a little weird climbing up and down, but fine once we are in the bed. Since the beds are so narrow, poor Roosevelt (our dog) had to sleep on the floor. We put a blanket down for him but he was having none of that. He climbed up into the passenger seat and slept there each night.

We left on Thursday and spent the first night at Roosevelt State Park in Mississippi. Yep, we chose that park because our dog is named Roosevelt. There were about a dozen campers who were just passing through and about another dozen of folks who lived there long term. They were on different sides of the lake, though. It was a great park even though there was very little green this time of year. And the nightly rate was less that $15 for full hookups. Now we only needed electricity, but the site had FHU. We ran the heater the first night, then ran the A/C the remaining nights as it was much warmer in Louisiana. And the humidity in Louisiana is bad.

Roosevelt State Park is near Morton, LA so we drove into the little town for supper. It is an old town with a slow speed limit and a cop on every corner... so if you pass through here, do the speed limit. We ended up eating at a little local place called Sam's Diner. It had good reviews so we took a chance. We prefer local places over chain restaurants any day. Anyway, the place was great. We had fried green tomatoes, a BLT and a big ol' plate of loaded nachos. All that for $10, too.

We're still working on getting the pictures we took online. In the mean time, here is a selfie that crazy Jerry took of us. [79] 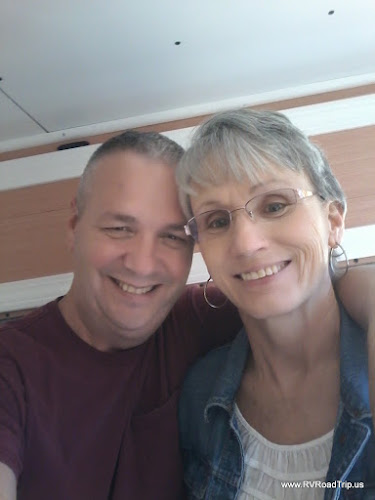 FEB
25
2016
Good grief! At what point in our society did we decide to stop making quality products? It seems everything out there is made as cheaply as possible, lasting one day longer than the warranty. I look for 2 things when I am shopping... is it made in the USA and is it a quality product. If it meets that criteria, I am gonna buy it if I need or want it. I am so sick of all the cheap chinese crap that you often have no other option to buy. Walmart has become a rental outlet... keep that receipt because the item you bought will be refunded within 90 days because it broke. Buy it, use it until it breaks, refund it, buy another one.

And RV makers... would you PLEASE talk to actual RVers and build a product that we want? Stop forcing low quality, uncomfortable, cheaply made and poorly designed units on us. And for goodness sake, it is 2016... why are you still putting analog thermostats in RVs?! [80]