NOV
6
2009
We're having a cookout with our Sunday School class this Saturday the 7th at Brierfield State Park. We'll be heading out today and staying the whole weekend in the camper. Everyone else will stop by around 4PM Saturday for the food and fellowship. If you're in the area, please stop by and say hello.
NOV
7
2009 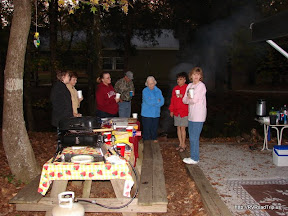 We had big fun at Brierfield State Park this weekend. We had lots of friends from church come out and we watched the Alabama vs. LSU game, grilled some tasty burgers and roasted giant marshmallows.

This was the last camping trip of the season so I'll be winterizing the camper when we get back home. Looking forward to March when we will once again head to the campgrounds... then May 31st when we go full-time. 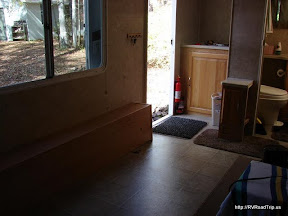 The dinette in the camper was not built for comfort. If you sat on those rigid benches for more than the time it takes to eat a meal, your back would be killing you. So, in order for us to forego chiropractic visits, we yanked out the bench seats and put them on CraigsList for $40. Got 2 calls right away!

We are going to add new plush, comfy seats... specifically the Cushing Luxura Manager's Chair from Staples. We shopped for chairs for weeks but could not find a standard swivel chair for a reasonable price (dang furniture stores and their 500% markups). So we decided to go with office chairs since their prices are much more reasonable. We sat in chair after chair after chair and narrowed it down to two models; the Cushing and Dugan. The Dugan model is high back which is nice for relaxing but the arms are kinda high and the cushion is on the firm side.

Jerry has no butt at all so when he sat in the Cushing chair, he just went "ahhhhh". The Cushing chair is regularly $199 at Staples.com but if you are reading this before Thanksgiving Day 2009, it will be just $99 on Black Friday! Oh yeah, 50% off. Once we get the chairs in the camper, I'll add a picture.

One last thing, we won't be using rolling casters on the chairs. They'll be replaced with bell glides which are little feet. Can't have the chairs rolling around while we are in motion. We're excited about relaxing in some very comfortable chairs.
NOV
16
2009
Well, we winterized the camper today. Blew out all the water lines with compressed air, drained the water heater and poured RV antifreeze into the drains and holding tanks. This will be the last time we ever have to winterize because starting next year we'll live in the camper year round.

We'll work on a few final mods over the course of the winter to make sure the camper is "just right" when we head out for good. It's almost time to really start emptying out the house, getting rid of absolutely everything that won't be going into the camper. Can you say "yard sale"? I knew you could.
NOV
30
2009

Well, it seems we survived Black Friday and Cyber Monday. We went to visit Jerry's dad in Georgia for the holiday so we did our Black Friday shopping over there. We got up at 3:30 AM and the bed we slept in sure did creak a lot as we were getting out of it... then we realized it wasn't the bed after all! We're just about too old for this sort of thing - LOL.

So off to Wal-Mart in Tifton, Georgia; we arrived at about 4:20 AM and the parking lot was packed, every parking lot near the Wal-Mart was also packed. We had to park at the far end of the main lot and walk to the store. Temperature was hovering somewhere around 40° but since the store was already open, we just went right in. We weren't there for any of the high demand items so we didn't have to get into any of the lines that were formed. At 5:00 AM when they announced you could start shopping, we picked up 4 pairs of Wrangler Jeans for $9 each (and that included a free T-shirt with every pair of jeans), a light jacket and a heavy jacket for $7 each and a 2 QT Crock Pot for $4.

We considered a 12v crock pot but this one draws less amps even when run though the inverter and it was much cheaper than the 12v version. That's all we wanted from Wal-Mart so now we headed over to Waffle House for breakfast. Yum! A little before 6 AM we drive over to Staples and find about 100 people lined up outside. Again, we weren't after high demand items so we weren't worried. Once they let us all in, we went to get our new chairs (remember we ripped out the dinette benches?). They only had ONE in stock! Grrr. So we took that one and they shipped the other one to us. It will be at our house on 12/01/2009. We also bought a TomTom Go 630 GPS to replace our out-dated base model Garmin Nuvi 205. Huge improvement!

We made it back home to Alabama just fine but did stop by the Army Surplus store at Fort Benning to grab a mil-spec folding shovel to keep in the camper. It sure was great to see how many brave men and women who are still willing to protect this nation of ours!

It started raining today and the temperature has dropped significantly so we'll be stuck inside. Once it clears up, we'll get the new chairs set up and post the pics.