JUL
18
2015
Good news everybody... we are starting up the blog again. Today we purchased a Ram ProMaster 2500 Series van, 159" wheelbase and a hightop roof. We will be installing a wheelchair lift in the passenger side sliding door and converting the remainder of the interior space to a camper!

To get everyone up to speed on us, we stopped full-time RVing in early 2012 and settled down in Centreville, Alabama. In July of 2013, Jerry got hit by a truck while he was riding his Kymco 200cc scooter. Yes, it was the other guy's fault. Jerry sustained a lot of injuries but none were life threatening. His injuries included a broken collar bone, broken shoulder blade, torn tendons in his shoulder, lots of bruising and more. When he was at the ER immediately following the wreck, the ER found cancer in his thyroid. We ended up selling the motorhome and tackled all of these issues.

Thankfully, all of the cancer is now gone but he is still recovering from shoulder surgery related to the wreck. Yes, 2 years and he is still suffering a great deal from it. Anyway, we have been itching to go camping again, just not full-time. We considered a wheelchair van towing a small Casita trailer, but figured why not kill 2 birds with one stone and have a wheelchair accessible camper van. So step 1 is done, we have a van. This will be a long process as we will be converting it ourselves as much as we can. We will keep you updated with the progress. We'll get a picture of the new van posted as soon as we take one, probably tomorrow after church. [36] JUL
20
2015
We started researching what it will take to insulate the back of the camper and put in a durable flooring. There are so many options out there like Reflectix, EZ Cool, ordinary fiberglass insulation and a vast array of sound deadening products. We haven't settled on how we will do it just yet, we need to watch lots more YouTube videos on what others have done and then determine what best suits our needs.

We traded our 2014 Ford Focus in on this van so we transferred our handicap tag over. We got that taken care of this morning for a cost of $31 and some change. The tag is good until the end of October, so we will have to renew it again at that time. It will probably be about $100 a year for the tag which is not horribly expensive.

Our insurance is with USAA, so dropping the car and adding the van was a breeze. The rate only went up a little due to the fact the van is worth more than the car was. We love USAA, the rates are significantly cheaper than even GEICO, who we had prior to USAA. Before that we had State Farm and they were insanely expensive. We'll never do business with State Farm again because of how badly they have treated us regarding Jerry's motorcycle wreck (the guy at fault is insured with them). Anyway, we are excited to begin the conversion process. We hope the VA gets the lift installed soon. [37] 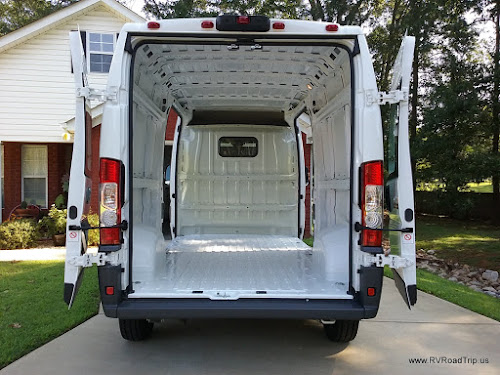 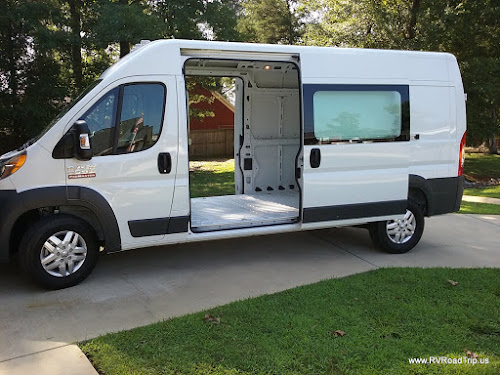 JUL
22
2015
We ordered the insulation for the cargo area of the van, it is called Ultratouch Radiant Barrier and we got it from Home Depot. According to the manufacturer, it is a lightweight, foil-faced, fire-retardant blanket-type insulation. The radiant barrier is made from recycled denim and provides excellent thermal and acoustical insulation, reflecting up to 97% of radiant energy for excellent savings on heating and cooling costs. Sounds good to us plus it has been used by others for their van conversion and they gave it rave reviews. We will document the installation process once we get started. We will also keep a running tab on what the conversion costs.

The flooring will be a layer of insulation then 3/4" floor grade plywood and some sort of residential type flooring on top of that. We have not decided yet if we want linoleum, laminate or some sort of rubberized flooring. It has to be durable and smooth so the wheelchair can rotate on it easily, and it needs to be easy to clean.

The back of the van currently has our son's belongings in it as he is moving to Mobile, AL on the 27th. He had to move out of his old place yesterday so the van is temporary storage... good thing we got such a big van! Until he gets all that unloaded, we can't do anything. And with my lame shoulder, I can only help him with the light stuff. Dang, I feel so useless. [38] 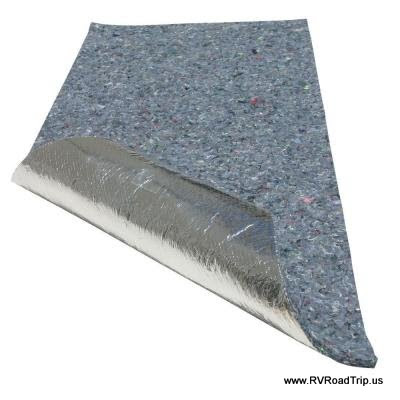 JUL
24
2015
We had a Mini 0801 Dash Cam in the car and we took it out along with all the wiring, but the sticky mount on the windshield was left behind. They are only $8 to replace so we ordered a new one and it came in yesterday (thanks Amazon Prime!). We found the sweet spot on the windshield of the van to put it and stuck in it place. For now, we are just plugging it into the 12v outlet on the console but we plan to route the wire under the trim and to the interior fuse box. We will use the multimeter to find out which circuit is activated with the ignition key, this way the camera comes on when we start the van and goes off when we take the key out.

According to the Home Depot website, the insulation we ordered should arrive today. But if I go to the UPS website, it shows the package is still in Jackson, MS. They better get a move on, LOL. [39]
JUL
29
2015
We took the van to Cutting Edge Window Tinting in Pelham, Alabama yesterday to get the windows tinted. We had originally intended to just tint the windows on the very back of the van and the 2 sliding door windows... but they made us a good deal to tint the cab doors as well. So we did. Here is a shot of the newly tinted windows, 32% on the cab doors and 5% on the sliders and back. It looks really good and makes a huge difference inside the van. Not only does it filter out light, but also heat and UV rays. [40] 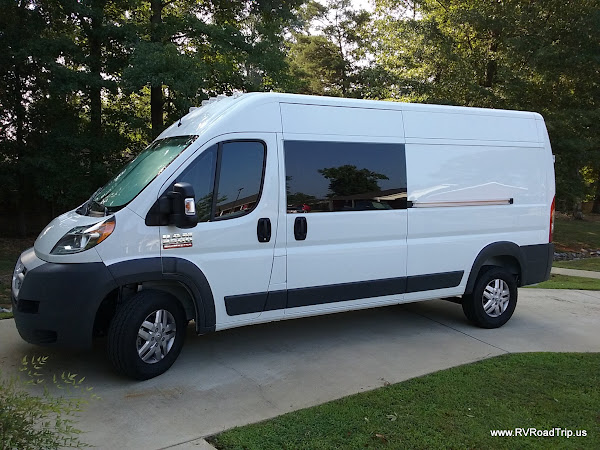