Aug
1
2010
We will be romping around familiar territory today, catching up with friends and family we haven't seen for 2 months. It's extremely hot here and the water level is fairly low in the local river, so I think tubing will not be an option. I'm considering going to Walmart, grabbing a lawn chair from the Lawn & Garden section and taking it over to Dairy and spending the day there. Think they'd notice? LOL
Aug
3
2010
We stopped by Walmart today but forgot to get a chair from the Lawn & Garden section! Maybe next time. We did make the rounds through the historic section of downtown Centreville today and snapped a few pictures. Here's one of the old theatre, the kids used to call it the Roachy Ritz. Below is a picture of Cynthia in front of that theatre in 1972! 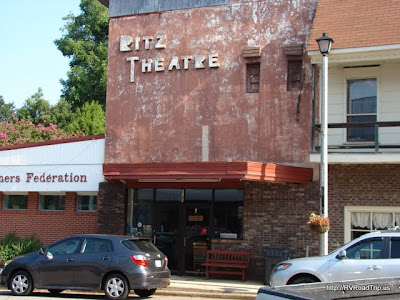 Centreville still has a Western Auto store as well as a drug store with a soda fountain! Pretty cool! We like to visit old towns, especially towns that have a Town Square. I just wish I could step back in time and see what it was like during its prime.

We pulled the list of geocaches in the area and will work on finding them as soon as the temperature drops below 100! It is unbelievably hot... we have to let the water run for a bit because the water in the hose between the spigot and the camper is literally scalding hot. Cynthia's brother has a 24' round pool that is 4' deep and I have been in hot tubs that were cooler. As soon as we're sure we don't have any further doctor's appointments, we are high tailing it out of Alabama in search of cooler temperatures!

Aug
8
2010
We decided to brave the heat and head out on the scooters to do a little geocaching and sightseeing. There aren't many geocaches within a reasonable distance of where we are but we did manage to find a few. One was at the Chamber of Commerce in Centreville, AL and here is a shot of the Ruckus at that location. 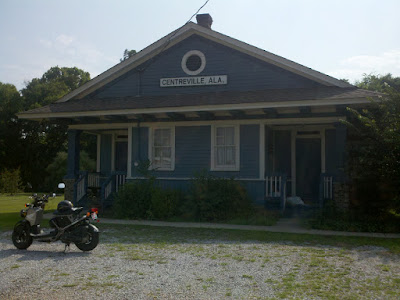 We rode to some out of the way places and saw some neat things. One was a Doppler Radar station and believe it or not, it had a small RV park behind it! There were about 5 RVs there and I guess they were used by hunters because we didn't see anyone there. We also found an old house next to the road and it had a hand pump over an old well. The pump no longer worked but it was still cool to see. I sure am thankful for modern plumbing! 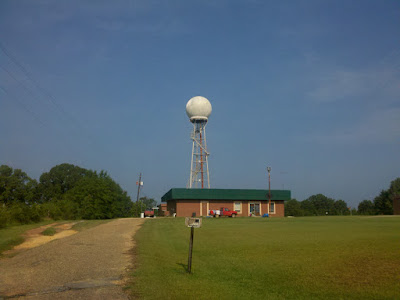 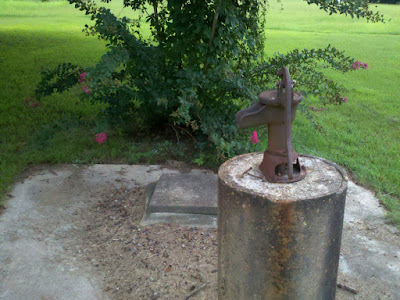 We picked up the grand daughters today and will have them with us for 2 days. Our camper is parked at Cynthia's brother's house where he has hookups. The kids will sleep in his house since we have no room for them in our little camper. On the way from their house we stopped by Walmart for some goodies. The girls decided to play dress up... the 8 year old was trying to put on her best Al Capone face. :) That's the thing we miss most when full-timing... not seeing the grandkids as often as we'd like. Good thing we can talk on the phone a lot and use video conferencing! 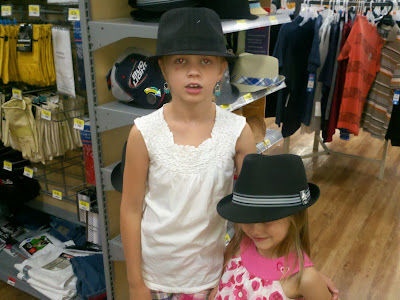 Aug
13
2010
Today, just after lunch, Cynthia looked at me from across the table and said "I think we've been in Brent, AL too long". So we packed up, hooked up and high-tailed it out of there! We didn't go too far, just down to Demopolis, AL to Foscue Creek Park. This is a beautiful COE park with full hookups, about a mile or two from town. We arrived about the same time as the rain did, so we stayed hooked up to the truck and sat in the camper until it stopped raining. We then connected everything, unpacked everything and set up camp. We paid for 10 days but may extend that if a spot opens up for Labor Day. The nightly rate here is $20 but I get it for $10 since it is a Federal park. Not a bad rate for full hookups.

The storm we arrived in brought lots of lightning with it. A giant bolt hit a tree about 100 yards from the camper, exploding the bark all over the place. None came near us but dang it sure was loud. Here's the tree... 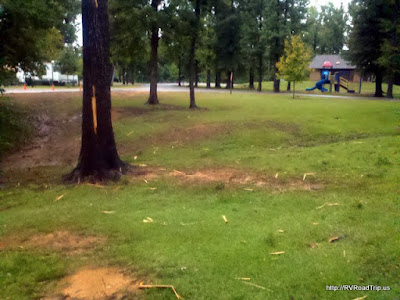 We also rode through Tannehill State Park to see what our options would be over the Labor Day weekend and while there, we saw this mama deer and her 3 little ones. 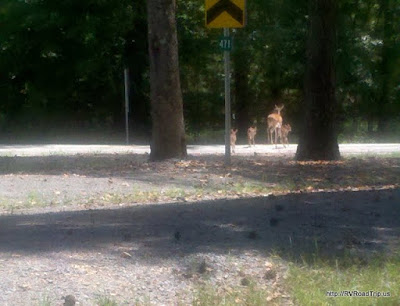 We're scouting out places to go for the winter season. So far we have seriously looked at Mission, Texas; Harlingen, Texas; and Quartzsite, Arizona. We're not overly picky but we realize we will be there for about 6 months... November through April. All 3 locations have their pros and cons so either would be fine.
Aug
17
2010
Mission, Texas... that's where we will spend our first full-timing winter. We landed a great workamping position at the Mission Bell RV Resort. This will be our first workamping experience and we are excited about it. We'll be helping in the office for 25 hours per week and the rest of the time we will be having fun and enjoying South Texas. We know we'll be the youngest people in the park but that's OK, we get along with everybody regardless of their age.

We already have our passports so we'll be sure to visit Mexico. Jerry has been to Cancun before but Cynthia has never been to Mexico at all. It will be a neat experience for both of us. Hopefully, we will be able to learn enough Spanish while we are there to be able to carry on a conversation with someone. Trying to teach ourselves on the computer isn't very effective.

One very important thing we did this week was get our son, Robby, moved into the Honors dorms at the University of Alabama. I did notice that it is much easier to move a boy in than it is a girl. I felt sorry for those parents with girls who were bringing in box after box after box after box after box of stuff. Robby had a TV, Xbox 360, laptop, a few sets of clothes and the basic toiletries. Oh, and a case of Mt. Dew. What more do you need? LOL Here is a pic of Jerry and his son, Robby. In 4 years he will be a Chemical Engineer and have a total college debt of $6,000.00. We are very thankful for all the scholarships he qualified for! 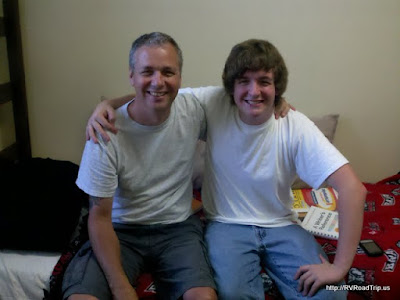 Now that Robby is all moved in and we have our winter plans all set, we can figure out what we are going to do for the next 3 months. We'll hang around this area until after Labor Day then slowly migrate towards Texas. I know... we'll start plotting out places to camp and things to see along the route we plan to take. I wonder what there is to see in Mississippi?

We added some pictures to the gallery under the heading "Bibb County" and "Foscue Park" Alabama. Since we are still at Foscue Park, more pictures will be added to that page in the coming week.
Aug
21
2010
It looks like we'll be jumping over to Tannehill State Park on Monday and stay there for 14 days, long enough to get us through Labor Day weekend. We didn't make reservations anywhere and most places are booked up, but Tannehill doesn't take reservations. We're hoping we can pull in Monday morning and there will be a free spot.

The weather finally cooperated and we got a little geocaching in today. There are lots of geocaches in Demopolis, Alabama and we had fun scootering around to find them. Cynthia got too hot around lunch time so took a break inside McDonalds. After that we headed back to the camper. We use our Droid X for geocaching and I have a holder on my scooter so I can see it while riding... but today I placed it in the holder and accidentally activated the camera. So here's a wonderful shot of the front of my scooter. That's the suction cup of the mount stuck to my speedometer and above that is the 12v outlet I wired up so I can keep the phone charged while riding. The little green light tells me when my blinker is blinking. 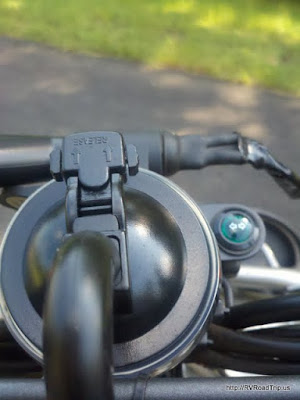 Aug
25
2010
We are now safely tucked in at Tannehill State Park near McCalla, Alabama. This is our 2nd time here this year. When we arrived there were far less people here than we anticipated so we got to pick our spot. We chose a site with full hook ups, site 112 which is right on the creek and next to a foot bridge that crosses the creek. There are lots of birds and squirrels to feed so we had to make a dash to the grocery store for raw peanuts. Priorities, ya know? 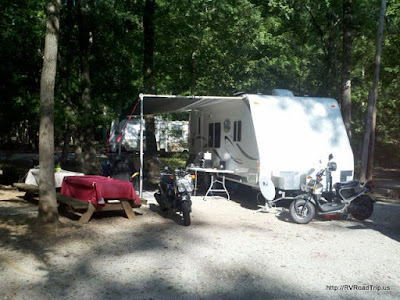 After we got settled in, we took the bicycles out for a spin through the park. It seems odd that such a big campground that is so empty now will be teeming with families in just a few short days. We don't mind the holiday crowds too much and if it does get too busy for us, we'll just retreat inside the camper.

The weather sure has cooled off and it is very comfortable out under the awning, even during the day. We like this! The air doesn't even kick on anymore at night and we are tempted to sleep with the windows open. This sure beats the 100° temps we had earlier this month. Our poor A/C never got a break. :)

There are 2 creeks that run through the campground and one has a spring that feeds into it. We walked over to the spring and took this picture. It is neat to see the water just bubbling up out of the ground. If you're ever here, be sure to see the spring. 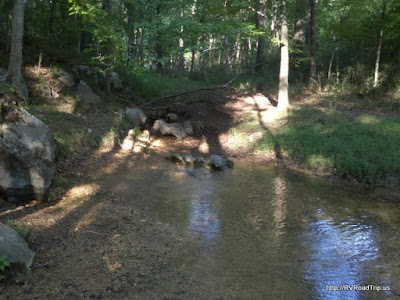 We'll depart here on the 7th since we didn't want to be in the mad rush that leaves on the 6th. From here we're thinking about cruising on over to Mississippi and Arkansas before heading to Mission, Texas for the winter.
Aug
28
2010
The biggest joy of being back in home territory is getting to see the grand kids! We had our grand daughters at the campground Friday & Saturday and we had a great time. We took them to the spring and they were fascinated that the water was coming up out of the ground, that is was crystal clear and very cold! They couldn't resist taking a refreshing drink. 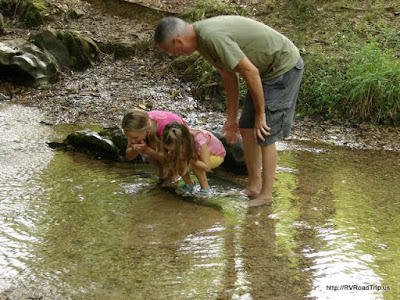 We rode bikes as well as the scooters and also visited the VW show that was there on Saturday. They got a kick out of the models that are mini campers. Someone had one painted up hippie style and they thought that was cute. Needless to say they had to pose for a picture! It was sad when they went back home but we sure do enjoy having them and we love them so much! 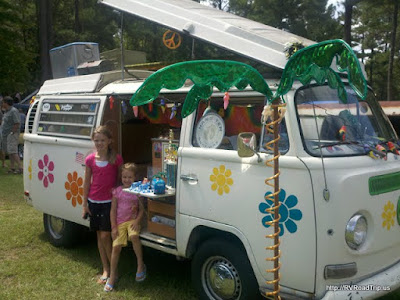 Out of all the pictures we took while they were with us, this is our favorite. We were all barefooted, standing on a rock at the Bubbling Springs. Jerry set the timer on the camera then jumped back into view just in time to snap this! 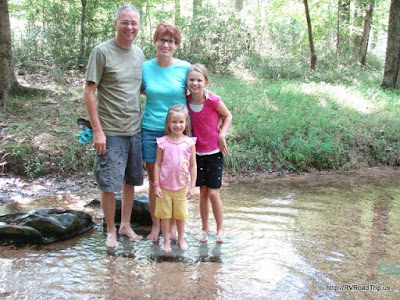 All the pictures we took are posted in the gallery, here's a direct link.